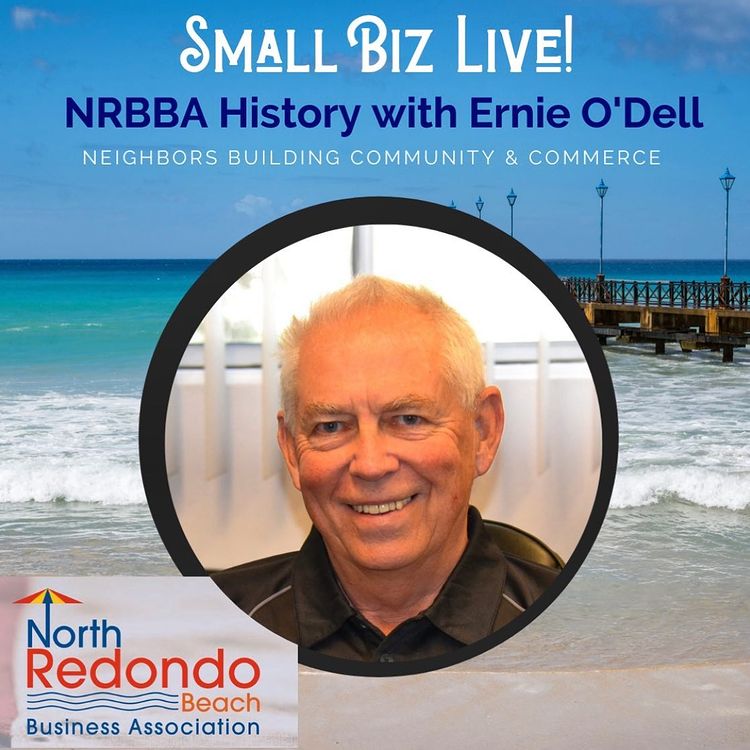 The NRBBA was founded in 1979 by a group of business people who were interested in improvements in North Redondo Beach, most notably Artesia and Aviation Boulevards, which had both fallen into a certain degree of disrepair at that time.

Now, more than 40 years later, as an all-volunteer organization, NRBBA continues to grow as the economic engine of the city with neighbors and small business owners coming together to build a thriving community.

Monthly meetings are a great way to connect and meet with local business owners, neighbors, and City leadership. Featured guest speakers address key issues that affect the neighborhood and business community. General meetings are free to attend. We meet on Zoom every 2nd Thursday of the month. Bring your coffee, positivity, community spirit and plenty of smiles!

Connect with Your Board of Directors

Ernie O’Dell, local business owner, NRBBA President,  Redondo Beach Chamber of Commerce Executive Director, and Redondo Beach City Treasurer, shared his recollections of the North Redondo Beach Business Association in 2003.  For a live interview with Ernie in 2020 scroll to the top of this page and click on the video link.

“In order to shed some light on the issues of the day, a little historical summary might be of interest to some who have not witnessed the events of the past.

The NRBBA was founded in 1979 by a group of business people who were interested in improvements in North Redondo Beach, most notably Artesia and Aviation Boulevards, which had both fallen into a certain degree of disrepair.”

“This same group founded the North Redondo Beach Rotary Club in 1979, as a way of instilling pride in the area, and increasing participation in the north end of the city.

Artesia Blvd. was sometimes referred to as the ugly step-sister when compared to other areas of the city, especially when it came to problems in the area. The Harbor, Pier and Riviera Village seemed to be getting more attention.   There was a graffiti problem and gangs had a larger presence which was not good for business. The power poles that lined the Boulevard were not under grounded and caused visual blight.

The City applied for and received some federal grant funding for commercial rehab that continues to this day. These funds have paid for a number of store front repairs and upgrades, awnings, paint etc. The Chamber of Commerce in concert with the City established a Graffiti Hot Line that the City still uses today to eradicate graffiti immediately after being reported.

When I joined the NRBBA it was a requirement that YOU also had to be a member of the Chamber of Commerce. As a Chamber member located in North Redondo you would automatically become a member of NRBBA.

I joined the Chamber and started attending NRBBA meetings in 1981.

In 1982 NRBBA decided to do something to bring attention to the group, while also returning something to the community from the businesses. Therein was the birth of “Springfest”. I was the first chairman of that fundraiser for the NRBBA in 1982. The NRBBA has held Springfest every year since as a fundraiser for the organization and way for the community, families and small businesses to gather and have some fun.

The following year I was elected President of NRBBA for the term 1982-83. The one burning issue at that time was under grounding the power lines. We continued to pursue that issue until its fruition in 1990.

After the utilities were under grounded, and a few successful “Springfests” the NRBBA had a small budget and opted to purchase the banner holders and banners for the street light standards that lined Artesia. For some time there were attractive NRBBA banners lining Artesia with an NRBBA logo emblazoned on them.

Over the years many issues have come and gone, with one of the most important ones recently accomplished, the rededication of the Boulevard from the 90- Freeway operated by CalTrans to the City, and the repaving, repairs, upgrades and landscaping of Artesia Boulevard.

One of the complaints that recur from time to time is the lack of participation from the other business people. Having managed the Redondo Beach Chamber of Commerce for over 10 years from 1985 to 1995, I know first-hand how difficult it is to get small business owners to  participate. There are always core groups that do all the work, and by in large the other 90 percent just don’t get involved. That’s not likely to change, and is the same everywhere. What can be done though is to constantly pursue new people. It’s much like the Rotary club, people are constantly coming and going and you have to recruit new people from the business community. As an example, of the twenty or thirty people who used to show up in the ‘80s, Tom Fouts and I are the only ones still active.

What can we do now? Obviously we need to put some effort towards getting more interest in the organization by doing an outreach to the businesses.

These efforts have been done in the past, and with some success, but it takes time, effort and some money to make any progress. We probably have the money, but it’s getting the consistent volunteer labor that is the problem.

When I joined the NRBBA they had their own dues of $25.00 per year. Then later an agreement was struck with the Chamber of Commerce to collect the NRBBA’s dues with their annual billing. The dues then went to $50.00 per year. The Chamber provided the same service to the RVA. This was later dropped due to the Chamber feeling that adding the other Associations dues to their billing was causing Chamber members to drop their membership.

While the NRBBA has contributed to a number of worthwhile community causes over the years, the focus should also be on improving participation from the business community.

The City has been very supportive of the NRBBA over the years with usually one, two or even three council members and other staff attending on a regular basis. I only missed a few meetings in my 25 years of NRBBA participation. The city staff provided a number of beneficial services over the years, including attempts to create common parking by recommending removal of some property line fences to provide better access and  surveys of parking assets, pedestrian issues, enhanced safety, commercial rehab and elimination of day workers, street vendors, and graffiti, to name a few.

The NRBBA has been quite successful in the issues it has chosen to pursue over the years.

Perhaps the next burning issue that would benefit the organization and the business community, as well as the residential community would be to help foster support for the North Branch Library. When the new library is completed it will be the pearl of Artesia Boulevard, and will instill a new pride in the architectural and cultural spirit of north Redondo Beach.

For any business association to be successful there needs to be funding available to do the outreach to get and maintain participation. The NRBBA should utilize its funds for that purpose, and if there is interest in doing bigger projects and or beautification or better seasonal lighting, perhaps the NRBBA should investigate establishing a Business Improvement District (BID). This is a task that takes dedication and a lot of work, but might be something the NRBBA might want to look into.

PS. The Riviera Village Association (RVA) recently established a Business Improvement District (BID) with good success. Perhaps an invitation to the RVA and the City to make a presentation to the NRBBA on the benefits and or pitfalls of establishing a BID would be a worthwhile program.

At this past Tuesday’s City Council meeting our Assistant City Manager described the intent of a BID was to help commercial districts compete with Malls, as Malls charge certain fees for maintenance, advertising, marketing etc. If the NRBBA is seeking more participation from the entire business community along the Artesia and Aviation corridors, this might bring renewed interest in the betterment of the North Redondo Beach business community”.

Via Zoom, until In-Person is Resumed, email info@nrbba.org for link

Get The Latest News & Info from NRBBA!